Hajj fare is one of the most sensitive and vital aspects of the Hajj operation which requires pragmatic and vigorous approach to manage. If carefully or carelessly handled, it can make or mar any heterogeneous nation like Nigeria.
Since the re-election of the present administration with its slogan of “Next Level”, critics have been using the 2019 Hajj package to smear the government, ridiculing it’s next level slogan as been responsible  for the escalation of Hajj fare from N1.5 million last year to N1.8 or even N2 million this year. 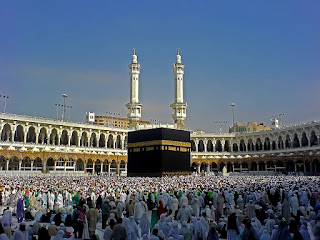 The objective of these criticisms is to make the masses become despair and  lose trust  and confidence  in the government. It is a known fact that government rode on the crest of popular support of the masses. Obviously one can affirm without contradiction that after the Oil and Power sectors, Hajj is another area that deeply touch the lives of ordinary masses in the country and therefore not surprising that it has become  a strong tool  to  discredit a government in the  eyes of the masses.                Thus  as  we approach the Hajj season, the mischief  makers have started the spread of the trending rumor streaming on the social media, that the National Hajj Commission of Nigeria, NAHCON, saddled with the responsibility of Hajj operation in the country has  released a figure of N1.8million as Hajj fare for the year 2019-fake news. Therefore the commission did not take such cynicism with  kid glove  neither did it allow the speculation or  rumour of Hajj fare  to go  viral  before taking appropriate action to nip it in the bud.
Towards this direction, the  management and  staff  under the leadership  of  Barr. Abdullah Mukthar Muhammed confronted the issue headlong in order to overcome the prevailing rumour coming especially through the social media. The Commissioner Personnel, Policy Management and Finance and that of the operations department to summon considerable number of states with a view to arriving at a realistic Hajj package for 2019 and also in order to counter the impending rumour of the Hajj fare.
With this development, the two Commissioners swung into action and randomly sampled some States across the six geo–political zones and invited them for discussions on all the Hajj components, one after the other and to see the possibility of making some downwards reviews that can at least bridge the gap of the universal 100% increased by the United Agent Transport Service Providers in Saudi Arabia.
One cannot easily understand the intricacies involved in arriving at the Hajj fare.  Infact, in Hajj fare package, there are lots of components. Some of these components are beyond the decision of the Hajj Commission and the States. The components such as those emanating from the Saudi Service Providers are not within the purview of the Commission or even the Nigerian Government to decide. This year, for instance, the basis for which some of these critics lay their argument for the inevitable astronomical increase of Hajj fare is from the sudden 100% increase of the United Agent fee which used to be as of last year 675.575 Riyal and is suddenly now jerked to 1351.15 Riyals. The critics were therefore confident that there is no magic the National Hajj Commission could do to avert the fare from going upward with the increase of 675.575 SR, translating N109.908.45. The components like the pilgrims’ accommodation in both Makkah and Madinah always depend on the vagaries of market forces in Saudi Arabia and the quality and the proximity to the two Holy Mosques. The only major component of Hajj package which the Commission and the States are actively involved in its decision is the airfare. Thus, the only area where these two agencies can add value is by subjecting the airfare to a   rigorous negotiations with the selected airlines. Even then, the exchange rate control are beyond all the agencies involved in the negotiations. It is interesting to know that in the last ten years, there is no significant increase in the airfare, almost the same range of the amounts of $1,750, 1,850 and of recent 1,550 keep surfacing yearly.
Other external components like the transportation in Saudi Arabia is another uncontrollable phenomenon. The sudden 100% increase of the United Agent Fee is not only bound on Nigeria but is a worldwide phenomenon. The question one would ask, what magic can the National Hajj Commission perform in order to bring down the fare? Actually,  the Commission was in a dilemma but instead of staying aloof watching helplessly, the Commission proactively began to explore ways to cushion the anticipated effect by critically revisiting some of the components especially local components which are within the jurisdiction of the States, such as administrative  charges, luggage, uniforms, local transportation in Nigeria, registration form, yellow cards, identify cards etc were x-rayed with the aim of reviewing them downwards so as to bridge the gap created by the 100% increase in the United Agent Fees.
This scenario necessitated the invitation of some of the states. The exercise which lasted almost two weeks gave the Commission a ray of hope for getting out from its challenge.
At the meetings with the various States either individually or in group, all the Hajj components were brought to the table for discussion.  Components which seem obvious to bring down for the benefits of the intending pilgrims were reviewed and analyzed and brought downwards. The minor components like, the registration form for the intending pilgrims was made uniform for all the States at the rate of N500, yellow cards, pilgrims uniforms, pilgrims enlightenment, identity cards were all made uniform except where there are genuine reasons to differentiate them. For example, some States actually transport their pilgrims from one States to another to airlift their pilgrims.

State like Zamfara falls into this category of transporting its pilgrims from Gusau to Sokoto airport. Also, some States gave the reason for charging double fare for pilgrims uniform and for the fact that they issue two pairs of uniform to help the pilgrims appear neat throughout the period of Hajj, which was also considered reasonable.
Often times, critics would ask why the delay in the announcement of Hajj fare? To them is just a matter of computing all the components and come out with a final Hajj fare. Realistically, this assertion is not true and not practicable. Even if one knows all these components what about the approval of the concessionary Foreign Exchange rate by the government. Are we not   aware that government use to approve a concessionary rate for either Hajj or Christian pilgrimages to make the journeys affordable to the intending pilgrims. If for instance, the exchange rate were left at the open prevailing market of say 360 Naira for a dollar. How much could the pilgrimage cost the ordinary intending pilgrims.
The National Hajj Commission of Nigeria, therefore, had to wait for the usual gesture of the government to grant a concessionary rate before the final announcement of the fare. The concessionary exchange rate graciously approved for this year is N306 to a dollar.  Alhamdulillah this single gesture of the Federal government considerably brought the Hajj fare to the present status of less than N1.6 million only.
At end of the consultative exercise with States, the analysis revealed that the States with the highest Hajj fare package is within the range of N1.560 million while the lowest rate came up to N1.513,798.10 million  respectively. Out of these rates, it is worthy of note that the Basic Travels Allowances (BTA) for the intending pilgrims is inclusive in the package, the BTA which is pegged parallel at $800 dollars for all the pilgrims which, if is converted at the open market rate of N360,000 for a dollar will translate to N288,000 Naira which in essence means that the Hajj package services paid by the pilgrims is not more than 1,252,000 or so.
The effort of the Commission in trying to bring down the Hajj fare rate did not stop there. At present, some states especially those states on the rate of N1.560million are still requested to further go and sit at the negotiation table with their Makkah Accommodation Landlords to see to the possibility of the reduction of even 50 or 30 SR which can impact the pilgrims. In my opinion, this is one of the outstanding issues that delayed the official announcement of the Hajj fare package for Hajj 2019.
I want to use this medium to erase the wrong impression  in the social media that Hajj components  is  more than  Makkah/Madinah accommodation, airfare, royalty and transportation. For the avoidance of doubt, there are about 25 components in Hajj package with Hadaya (Animal Sacrifice) exclusive for being optional and depends on the type of Hajj the intending pilgrim intends to embark. We should also note that, the pilgrims feeding on arrival at the airport and when leaving the Holy land are built into the package. If we were to make a critical calculation of the whole Hajj package components, what the pilgrims  pay to service providers is within the range of only N1million. All other items go directly to the pilgrims themselves.Notwithstanding the action of mischief makers the National Hajj Commission has done the unexpected wonders for the Nigerian government and intending pilgrims by bringing down and maintaining the last year’s Hajj fare despite the 100% percent increase in United Agent Fee and the Commission has put the cynics to shame, their baseless criticisms is now in a state of comatose.