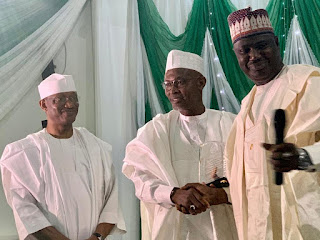 The Federal Capital Territory Administration has maintained its lead for two consecutive years the overall best among the states and armed forces of federation in hajj operations.

This was as a result of award presented to the FCT Muslim Pilgrims Welfare Board by the National Hajj Commission of Nigeria (NAHCON) in recognition of its outstanding performance in hajj 2018.

The Award was presented to the Director of the Board, Mallam Muhammad Bashir by Senator Aliyu Sabi Abdullahi who represented the Senate President, Senator, Ahmad Lawal during the stakeholders meeting on 2019 hajj exercise and Award Presentation held at the National Mosque, Abuja on Tuesday 25th of July, 2019.

The FCT won and retain the first position in recognition of its superb management of hajj matters in 2018 in all aspects which include education and orientation, transportation arrangements in Saudi Arabia, feeding arrangements, Information management, accommodation and camping of pilgrims as well as general welfare of the FCT contingents during the exercise both in Nigeria and in the holy land of Saudi Arabia.

This is the second time the board took the first position as the board also won the similar award of excellence for outstanding performance in 2017 hajj operation.

In his comment on the award, the Director of the board, Mallam Muhammad Bashir expressed his happiness and pledged the determination of the entire staff of the board to improve on the services to the FCT contingent during this year’s hajj operation.

He expressed his appreciation to the management of the entire FCT Administration that supported the board to clinch and retain the award for two consecutive years.

In another development, the board has commenced refunds to intending pilgrims who paid trough the board for this year’s hajj following the reduction of the hajj fare earlier announced by the NAHCON.

A statement from the Public Relation Officer of the board, Muhammad Lawal Aliyu said that, intending pilgrims who paid before the reduction are to forward their account details and photocopy of their evidence of payment to the area officer where they made the payment to process the refund.

He said, in order to ensure transparency and accountability, intending pilgrims without bank account, were requested to write authorising the board to pay the refund to the account number of their choice.

Similarly, the board is to administer inoculation of the intending pilgrims this weekend at the permanent hajj camp Bassan Jiwa from 8 oclock in the morning.