They appeared with their relatives in a sober mood. Many were in pains because of their health challenges, others in harrowing socio-economic condition, just as they battled to fight back tears as they shared their stories.
But they all left the Tafawa Balewa Square (TBS) head office of a faith-based charity organisation, Zakat and Sadaqat Foundation (ZSF), with joy.

The 53 people with various health issues went home with N32million courtesy of the foundation.
Five-year-old hearing-impaired boy, Ramadan Muhammed was the biggest beneficiary as his mother, Mrs Aminat Muhammed, received N6million cheque from the foundation.
Mrs Muhammad said Ramadan’s both ears are impaired and the doctor said he would need N12 million to fix them.
“We detected the disorder when he was two years old. When I realised that, I took him to the hospital. On getting to the hospital the doctor said, he will have to undergo surgery to correct the disorder and the sum of N12 million will be required for the surgery,” she said. 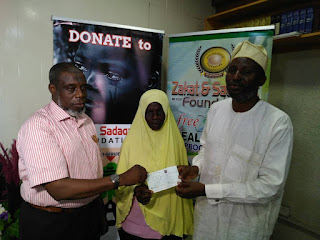 She thanked ZSF for the gesture. “I am very grateful to Allah and ZSF for giving me N6million out of the N12 million needed for the surgery. I pray to Allah to be pleased with Zakat payer for removing the burden from my son,” she said.
Miss Ganiyat Sanni, a kidney failure patient lying critically ill at the Lagos State University Teaching Hospital (LASUTH) got N2.5 million.
Her mother, Mrs Afusat Sanni said she needs N8 million for a transplant.
She was shedding tears while recounting her daughter’s ordeal that started in 2014. Some of the people who came for assistance could not hold their emotion as they listened to Mrs Sanni – they cried.
Mrs Sanni said she’s donating one of her kidneys to her daughter, saying: “I was advised to donate my kidney for her with a treatment cost of N8.5million. I have raised N3.5million before coming here. With this cheque, it remains N2.5million to complete the cost of the surgery. Nigerians should assist to save the life of my daughter with the remaining N2.5million. I don’t want her to die.
“She is supposed to be writing the current Senior School Certificate Examinations (SSCE) but she couldn’t due to her health condition. Right now, I just received a call from LASUTH that she needs blood transfusion urgently. Please save my daughter from dying.”
ZSF Executive Director, Prince Sulayman Olagunju at a short briefing before the disbursement of cheques to beneficiaries said the gesture was is in line with the foundation’s tradition of prioritising health and restoring the lost hope of the patients towards regaining their health.
Olagunju said the beneficiaries require funds for urgent surgeries and treatments for heart diseases, kidney transplants, stroke, fractures, cancer of the breast and hip replacements, among others.
“We sincerely feel the pains of those we could not consider after undergoing a series of screening exercises for lack of enough funds. We pray Allah to open His door of mercy for them.
Oyo ZSF supports widows with cash gift
The Foundation in Oyo State also commemorated the World Widows Day 2019 in Ibadan recently, with a support programme for 30 widows which saw them smiling home with cash gifts. A total of  N450,000 was doled out to all the widows at the programme.
The state administrative officer of the foundation, Malam Qasim Durojaye, said the cash gift was a token of the organisation’s commitment to the general well-being of the widows whom he described as a most vulnerable group in the society, next to orphans.
“We are commemorating the World Widows Day, which the United Nations started some years ago. For Zakat and Sadaqat Foundation, this programme started last year when we gave a sum of N10,000 each to 30 widows. But this year, we are giving the same number of widows a token of N15,000 each.