13
Share
Facebook
Twitter
WhatsApp
Pinterest
Linkedin
Email
Print
The National Hajj Commission of Nigeria (NAHCON) has given update on the homeward journey to the country from the holyland. The commission stated that so far, it has airlifted over 6000 pilgrims in 13 flights to the country. 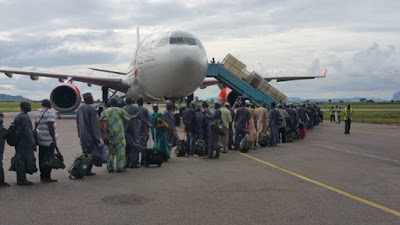 Acccording to the statement by Head, Public Affairs of the commission, Hajia Fatima Sanda Usara, “The third and final phase of the 2019 Hajj operations has since commenced with pilgrims’ return leg being conducted by Max Air and FlyNas airlines respectively.
“Over 6,000 pilgrims have returned in 13 flights. Thankfully, FlyNas is about to conclude airlift of Lagos pilgrims with only 11 pilgrims left on ground in Makkah. Other states where airlift has commenced and are recording steady progress include Katsina, Kebbi, Kano, Zamfara, Osun and Kaduna states.
“Already, 51, 699 5-litres bottles of ZamZam water had been dispatched to Nigeria for distribution to pilgrims upon their arrival. This delivery of Zamzam water has been in place in recent years to restrain pilgrims packing Zamzam water into their luggage.
“Weighing of pilgrims luggage is another matter central to the Hajj exercise at the moment. The NAHCON (National Hajj Commission of Nigeria) Chairman/CEO, Barrister Abdullahi Mukhtar Muhammad, had during the post Arafat meeting with stakeholders enjoined chief executives of State Pilgrims’ Welfare Boards to facilitate weighing of pilgrims’ 32 kg bags within the vicinity of the pilgrims’ lodge before being moved to the weighing and screening centres. This effort is to fasten the process and for the safety of pilgrims’ luggage. Similarly, officials of NAHCON luggage Committee do conduct screening of 8kg hand luggage to detect contraband items and to ensure that pilgrims do not board the buses to Jeddah with multiple luggage. This strategy was introduced to arrest the unfortunate incidences of Nigerian pilgrims causing delays in the ever-busy Jeddah airport.
“Pilgrims’ movement to Madinah from Nigeria achieved an almost 100% record but for about 74 Ebonyi and 20 Anambra pilgrims yet to visit the Prophet’s city out of their welfare board’s volition so that their pilgrims could have maximum time in Madinah. Hence, arrangement has concluded to transport them for the visit.
“Conclusively, parts of the activities of the final phase of Hajj 2019 were series of courtesy visits to state pilgrims by NAHCON officials and board members. The visits were conducted with the aim of listening to the pilgrims’ complaints and observations for the sake of incorporating the observations in future planning if the viewpoints are tenable. NAHCON teams have gone round the states’ accommodations in Makkah,” she said.
- Advertisement -

Previous article
How Saudi Arabia has increased female employment, and why the country benefits
Next article
KA’ABA NEWS: Signs of an accepted Pilgrimage/Hajj