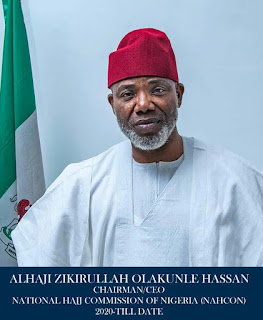 The Chairman of National Hajj Commission of Nigeria, NAHCON, has charged contractors handling various projects for the commission to speed up work at the sites in order to deliver the projects soon.
The chairman who met with the various contractors Wednesday in his office in Abuja said the meeting was necessary because he wanted Nigerian pilgrims to start enjoying the facilities as soon as possible.
In attendance at the meeting were project supervisors and other relevant officials from the Federal Ministry of Works and Housing. Also in attendance were the three permanent Commissioners and senior management staff of the Commission.
According to the Head, Public Affairs Unit of the commission, Hajia, Fatima Sanda Usara:
“The meeting was at the behest of the NAHCON Chairman and management in order to speed up work on the sites and to determine whether there are any circumstances hindering completion of the projects.
“The meeting was seen as necessary if Nigerian pilgrims are to start enjoying the utilities as soon as possible. The meeting therefore paved way to hasten work at the sites with deadlines issued for completion.
It would be recalled that NAHCON is constructing various amenities across the country for use by pilgrims and for revenue generation during non-Hajj operational periods. The constructions include hotel-like structures for camping of intending pilgrims before airlift, construction of clinics, event centres, mosques, and perimeter fencing among others.
Hajia Usara stated that works at the several sites in all the geopolitical zones are at advanced levels while some have been completed.
- Advertisement -
- Advertisement -