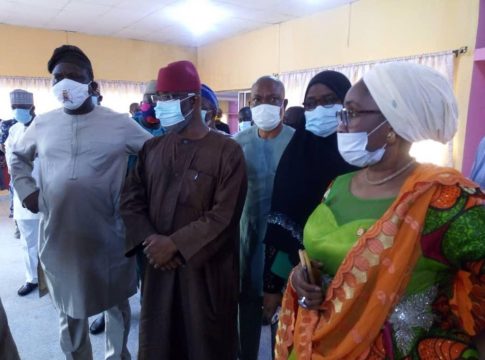 The Hon. Commissioner for Home Affairs, Prince Anofiu Olanrewaju Elegushi has appealed to the National Hajj Commission of Nigeria (NAHCON) to give all the State’s Muslim Pilgrims Welfare Boards the right to generate revenue internally in order to have enough fund to effectively execute hajj operations in their respective states.

Elegushi made the appeal during an inspection visit by the management of NAHCON, led by the Chairman/CEO, Alhaji Zikrullahi Kunle Hassan to the Hajj Camp in Akowonjo, Alimosho Local Government Area of Lagos State, recently.
The Commissioner maintained that by availing the State’s Muslim Boards the opportunity of generating revenue internally, they would be financially buoyant to carry out hajj operations without putting much burden on their respective State governments, adding that by reducing the huge expenses usually being incurred by the states during hajj operation, the state governments would be able to channel the fund to other equally important projects that will be beneficial to the generality of the people.
While hailing the NAHCON Chairman and his management team on his effort towards improving hajj administration in Nigeria, Elegushi urged the management to consider building an Islamic Centre on the expanse of land.   He stated that a standard Muslim school could also be established to cater for the children of Muslims residing in the area while the already completed structures could be converted to hostel for the admitted students.
He added that such legacy if established would bridge the gap of shortages of standard Muslim schools in the area and serve as a source of revenue generation for the organization.
He also advised NAHCON management to commercialize the Multi-Purpose hall in the camp with a view to renting it out to interested individuals/organizations for the staging of Islamic occasions and events. He stressed that any individual/organization applying to use the hall must be made to obey lay down rules and regulations in line with Islamic injunctions.
Earlier in his speech, the NAHCON Chairman/CEO, Alhaji Zikrullah Hassan sought the assistance of the Lagos State Government for the completion of the Akowonjo-Alimosho Hajj Camp, saying the camp has remained in its present status because of lack of fund.
Alhaji Hassan stressed that what the Federal Government’s agency has been able to accomplished so far on the camp, was achieved through the development levy being collected from every intending pilgrim from the states in the South West which include Lagos, Ondo, Oyo, Ogun, Osun, Ekiti, Edo as well as the Nigerian Armed Forces and the Private Tour operators.
While pleading with stakeholders not to allow the project to be moribund, he said that the development levy which is the major source of Internally Generated Revenue (IGR) for the agency was initially fixed at N5,000.00 but has now been reduced to N3,000.00 on each intending pilgrim.
The inspection visit by the NAHCON Chairman to the Akowonjo hajj camp was his first official assignment in Lagos state since his appointment by President Muhammadu Buahari.
Lagos State officials at the inspection tour with the NAHCON team includes; Hon. Commissioner for Tourism, Arts & Culture, Pharm. Uzamat Akinbile-Yussuf, Special Adviser to the Governor on Islamic Affairs, Alh. Ahmed Abdullahi-Jebe, Executive Secretary, Lagos State Muslim Pilgrims Welfare Board, Mr. Rahman Ishola and Head of Operation, Mr. Kamal Zubair.
- Advertisement -
- Advertisement -