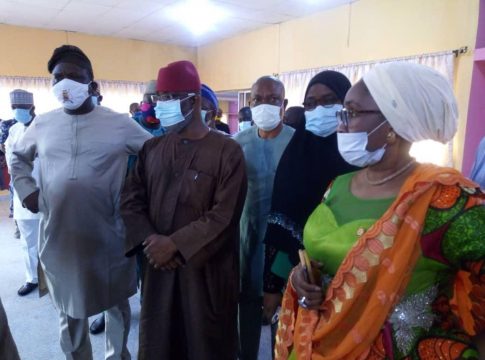 The National Hajj Commission of Nigeria, NAHCON, has refuted the report published by a daily newspaper (not Vanguard) that the commission led by its chairman, Alhaji Zikrullah Hassan during his official visit and inspection of the Lagos Hajj Camp said, the facilities had been abandoned for 20 years.

The commission stated that at no point did the chairman imply that nor made such comment.

In a released signed by the Head, NAHCON Public Affairs, Hajia Fatima Usara Sanda, “As far as the Commission is concerned, that proclamation by the reporter is far from the truth and NAHCON would like to put the record straight.

“Lagos state Hajj camp has been central in NAHCON’s main concerns, as have been all the others, right from the Commission’s inception and even before. The buildings in the Lagos camp are ongoing, the land and structures valued at almost a billion Naira. Different Hajj managers in the past 30 years generated funds raised for the construction of the buildings in the Hajj camp.

“It is worthy to note that NAHCON’s zonal office has been functional in the Hajj Camp site since around 1982. This office has well equipped staff, offices, standby generator and it is responsible for coordinating airlift activities of Southwest region. In August 2011 for instance, a NAHCON visitation panel recommended in its report that Lagos Pilgrims’ Reception Centre Project should be included in NAHCON’s short-term development plans. This timing is certainly less than 20 years ago.

“Currently, the Lagos camp has at least three almost completed event centers whose funding are mostly fuelled by the Hajj Development Levy. It would be recalled that the Hajj Development Levy was first introduced during the defunct Directorate of Pilgrims Affairs (DPA) under Brigadier-General Ahmad Muhammad Daku (Rtd) as Sole Administrator 1997-1999. Funds generated from the levy were primarily used to purchase medical equipment for the DPA’s medical activities in Saudi Arabia.

“The levy was reintroduced in 2012 by the 2nd NAHCON Board to serve as an alternative source of funding Hajj Infrastructure across the Country. Lagos state camp benefited with Construction/Renovation of Event Centres and Landscaping at the Hajj Camp with funding from the Hajj Development Levy Projects. It would interest the reader to know that then DPA under the Ministry of Foreign Affairs first awarded the Lagos Hajj Camp contract in the 80s but could not be completed due to funding and other challenges. This was revived in 2018 and re-awarded by NAHCON to Messrs Gridline Nigeria Ltd and the construction has attained 85% completion. The works on the project yet to be accomplished are fixing of electrical fittings and painting.

“Indeed, the Hajj camp in Lagos Airport has been operational as an extension to the main Hajj camp due to the former’s convenience being located inside the airport. This does not however mean that the main project has been abandoned. Instead, the airport camp is complementary to the main camp so as to hasten screening and departure of intending pilgrims from Southwest zone to Saudi Arabia. Meanwhile, work has continued on the main site, which will be put to use for the general public and Muslim Ummah in particular immediately after it is commissioned.

“The present NAHCON Chairman was in Lagos on Monday 13th July as part of his assessment tour of all ongoing projects across the country and to explore other means of financing other projects in the camps. It is reiterated here that the Chairman made no insinuation close to the project being abandoned. Instead, he had commended the contractors for the extent of work accomplished and encouraged them to expedite action for utilization of the buildings to commence.

“Hence, the Commission would like a retrieval and corrigendum on the said story due to the embarrassment it has caused the current Chairman and the Commission in general.