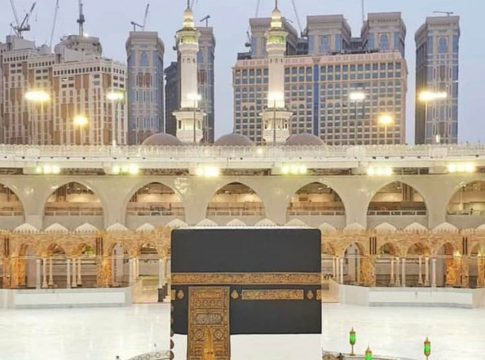 The safety of pilgrims had been the top priority in preparing for this year’s Hajj, Saudi security officials said on Tuesday.

Announcing the completion of the first stage of planning for the annual religious gathering, the commander of the forces responsible for security at the Grand Mosque in Makkah stressed that protecting worshippers was paramount.

“We have mainly focused on the health aspect this year for its extreme importance in the current unique situation (the coronavirus disease pandemic). The remaining stages will be implemented in the coming days,” said Maj. Gen. Muhammad Al-Ahmadi.

He pointed out that new arrangements had been put in place to control pilgrims’ entry and exit to the Grand Mosque to ensure social distancing and effective precautionary measures against COVID-19.

Defined pathways for the performance of walking rituals around the Kaaba and between the hills of Safa and Marwah had been established, and entrance to the Grand Mosque area would only be allowed to those with official permission.

Due to the virus outbreak, the Grand Mosque will be closed to worshippers for Arafa day and Eid Al-Adha. “The decision to suspend prayers in the Grand Mosque including its outdoor arenas will continue. We invite people of Makkah to break their fast on the day of Arafat in their homes,” added Al-Ahmadi.

The command and control center in Makkah located in Mina and Muzdalifah will be fully operational. Entrances to Makkah city would be controlled by different security forces for 24 hours to prevent people without a permit gaining access.

The General Presidency for the Affairs of the Two Holy Mosques said that more than 80 years of experience in crowd and crisis management had been behind the Kingdom’s move to restrict the number of worshippers performing this year’s Hajj pilgrimage.

During a virtual meeting to review the Saudi operational plan for the Hajj season, president of the general presidency, Dr. Abdulrahman Al-Sudais, said that the Arafat sermon will be translated into 10 languages, including Chinese and Russian, in addition to an English interpretation on the Holy Qur’an channel and French on the Prophet’s Sunnah channel.

He added that the operational plan adopted for Hajj had focused on the enforcement of precautionary and preventive measures to safeguard the health of pilgrims.

Special arrangements have also been made for the delivery of the Kaaba’s Kiswa (cover) on Wednesday by Makkah Gov. Prince Khalid Al-Faisal, in line with measures to stop the spread of COVID-19, Al-Sudais said.

Meanwhile, on Tuesday, Saudi Minister of Hajj and Umrah Dr. Mohammed Saleh Benten visited the pilgrims’ reception headquarters at the Four Points hotel in Makkah, where he was briefed on preparations to receive and accommodate them from the fourth to the eighth day of the month of Dhu Al-Hijjah.

He then toured the pilgrims’ camp in Arafat and reviewed procedures for their movement to the Mount of Mercy (Jabal Al-Rahmah). Benten also checked services for pilgrims at Muzdalifah, including preparations for the provision of meals in three 40-foot vehicles.

In addition, the minister went to Mina and viewed one of the towers designated for housing pilgrims, where he inspected facilities and room services.

At the end of the visit, he watched a presentation on the special procedures put in place to transfer pilgrims from their residences to the Jamarat Bridge outside of Makkah.

Previous article
Madeenah Maghrib 21st July 2020 | Sheikh Abdul Muhsin Al Qasim | Surat Al-Mā’idah
Next article
What you must know about Kiswah of Kaaba Why is a white cloth put around it?