Kaaba News
HomeDocumentaryThe history of guardianship of Kiswah in Kaaba

The history of guardianship of Kiswah in Kaaba 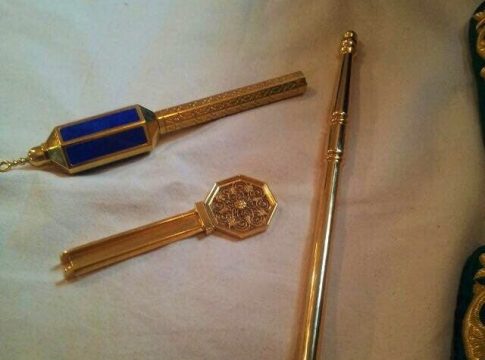 The guardianship of the Kaaba is still inherited by the sons of Shaybah and their successors. A tradition that has been instituted by the Prophet after the conquest of Mecca, the eighth year after Hijra. Following which, he entrusted the key of the city to Uthman Ibn Abi Talha and deemed the caretaking of the Kaaba to be uniquely and eternally bestowed upon the line of the sons of Shaybah.

The prophet’s words were: “Take it, Oh Bani Talha, eternally up to the Day of Resurrection, and it will not be taken from you unless by an unjust, oppressive tyrant.” This, in turn explains why this tradition has been inherited by the sons of Shaybah and their successors till present times.

Islamic scholar and researcher Mohi Eddin al-Hashemi, who specializes in the two Holy Mosques, notes that the story of the guardianship of the holy Kaaba had been first instituted during the times of the Prophet Ibrahim. During which, God ordered the Prophet Ibrahim and his son Ismail to raise the foundations of the Kaaba. Hence, initiating the tradition and the guardianship of the Kaaba.

Read More:http://What you must know about Kiswa in Kaaba

The latter includes the maintenance of all matters related to the al-Musharrafah (Holy Kaaba) ranging from its opening and closing it, to preserving its immaculacy as well as monitoring its visitors. Monitoring all affairs related to the Holy Kaaba also comprises the supervision of the mausoleum of the Prophet Ibrahim.

The first caretaker of the Kaaba and the historical succession

Al-Hashimi adds that the Prophet Ibrahim entrusted, in turn, the guardianship of the Kaaba to his son Ismail, who continued the tradition until his passing. Afterwards, the tradition was taken over from the sons of Ismail against their will by the tribe of Jarham (Banu Jarhma). Later on, it came also to be forcibly passed over to the tribe of Khuzaah (Banu Khuzaah), but its possession was regained by Qusai ibn Kilab ibn Murrah, who was the third great grandfather of the prophet Muhammad and a descendent of Ismail, the first to serve as the Kabaa’s caretaker.

Subsequently all matters related to the latter were entrusted to Qusai ibn Kilab. The latter had three sons namely Abd-al-Dar the eldest (great-great grandfather of Shaiba ibn Hashim more known as Abdul-Mutallib ), Abd Manaf (great-great grandfather of the prophet Muhammad) and Abd-al-Uzza. Abd Manaf was highly honored among the tribes and honored for his wisdom and sound discernment during his lifetime, which prompted Qusai to entrust the caretaking of the Kaaba to Abd Manaf. However, shortly before Qusai’s death as way of honoring his eldest Abd-al-Dar, he entrusted to him all his rights and powers including the caretaking of Kabaa.

The story of the caretaking of the Kaaba in Islam

As stated by Mohi Eddin al-Hashimi, the caretaking of the Kaaba is inherited by the eldest son of each family and it was passed until it transferred to Uthman Ibn Talha who lived during the prophet’s times. As reported by Uthman Ibn Talha on the day of victory of Islam over Makkah, the messenger of Allah entered Makkah on the eighth year of Hijra, and when they were about to enter the Kaaba they found it locked. They asked who was keeping the key and they found out it was with Uthman Ibn Talha. The latter was a non-believer so upon knowing about the of arrival prophet Muhammad he locked the door.

Ali went to find Uthman, and asked for the key but Uthman did not give it to him. Ali then snatched the key from him so as the prophet enters the Kaaba. They opened the door and the prophet entered the Kaaba and prayed two rakah salaah.

At that time, Abbas Ibn Abd Al-Muttalib, the uncle of prophet, was there and requested that the key must be kept with the family and then Gabriel came down with a verse and revealed inside the Kaaba.

The Sheba family are the keepers of the Keys, and they are the keepers because Allah desired so by revealing the only Ayaat that was revealed inside the Kaaba in Masjid al-Haraam. “Indeed, Allah commands you to render trusts to whom they are belong to …..” ( 4:58).

Soon as that verse was revealed, prophet Muhammad ordered Ali to return the key to Uthman Ibn Talha and excuse themselves. Ali then went to Uthman and gave back the key and presented their apologies for the wrong he had done to him by forcibly taking the key. The latter shocked Uthman, who could not believe Ali was giving back the key to him as instructed by prophet Muhammad (peace be upon him), conqueror of Makkah. Ali explained to him that a verse was revealed for him, Allah instructed the prophet to return the trust to whom it belong to.

The guardianship in the Saudi era

Al-Hashemi pointed out that the guardianship of the Kaaba remained in Bani Sheba, which is bestowed upon the elders of the family until today. The functions of the ancient caretaker were to open and lock the door of the Kaaba and to oversee its construction and maintenance, adding to the washing, the cleaning and supervision of the shrine of Abraham.

At the present time, the guardianship belongs to Sheikh Mohammed bin Zine Al Abidine bin Abdul-Maati al-Sheiba, he remained in his position for 43 years. He passed away in 1253 AH and had male sons. His eldest son Abdul Kader inherited the guardianship after him, then his brother Solomon, Ahmed and Abdullah.

Al-Hashemi said that the guardianship was transferred to the next generation to Sheikh Abdul Qadir Bin Ali bin Mohammed bin Zine Al Abidine Al Sheiba. He was the first to witness the unification of the Kingdom and died in 1351.

Mohammed Bin Mohammed Saleh Al Sheiba became the caretaker of the Kaaba. Upon for his illness, he transferred the guardianship to Sheikh Abdullah bin Abdul Qadir al-Sheiba, who was succeeded by his sons Amin, Taha and then Assem.

Prince Khaled al-Faisal handed him the lock on behalf of the King on the occasion of the cleaning of al Kaaba. He witnessed the installation of a lock for the inner repentance door of the Kaaba and died after a severe battle with the disease. His cousin Sheikh Dr. Saleh bin Zain Al-Abidine Al-Sheiba became the caretaker.

Hashemi said at the time, the functions of the caretaker are limited to the opening and closing of the Kaaba. The Royal Court and the Ministry of the Interior and emergency forces coordinate with him if there are any state guests.

When is inside Kaaba cleaned?

The Kaaba is cleaned annually on the fifteenth of Muharram of each year. After the issuance of the Royal Order, the Emirate of Mecca coordinates with the caretaker about the procedural agreements. They canceled cleaning the Kaaba on Shaaben the first because of the expansion work now and the intensity of congestion at that time.

In addition, the head caretaker receives the new cladding of the Kaaba on the first of Thu Haja to be installed on the day of Arafat by the tailors and specialists of the King Abdul Aziz Complex for cladding.

The ceremony of handing over the cladding of the Kaaba takes place at the King Abdul Aziz Complex for the cladding and is held in the presence of the Head of the Great Mosque of Mecca and al-Masjid an-Nabawim, Dr. Abdulrahman bin Abdulaziz al-Sudais alongside the Director of the Complex Dr. Mohammed bin Abdullah Bagoudah, and a large gathering of officials and deputies.

Previous articleWhat you must know about Kiswah of Kaaba Why is a white cloth put around it?
Next articleDozens face legal action for changing COVID-19 test results to enter Abu Dhabi