Kaaba News
HomeHajjWhat you must know about Kiswah of Kaaba Why is a...

What you must know about Kiswah of Kaaba Why is a white cloth put around it? 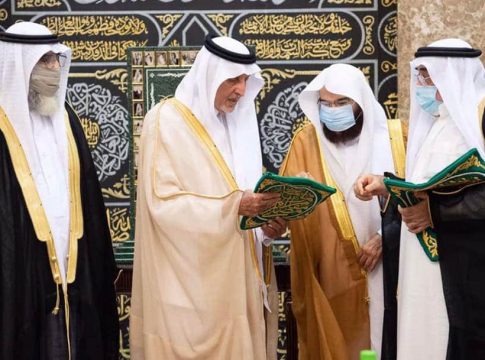 The Kiswa of the Holy Ka’bah which is to be dressed on the 9th of Dhul Hijjah 1441 has been handed over to the caretaker of the House of Allah, Sheikh Saleh Sheiba. According to Haramain Sherifain monitored on the first of DhulHijjah, the head of the family of the historical caretaker, Sheikh Saleh Sheba has received the material and ready to be dressed.

Every Year the Kiswah of the Kabah is raised and a white cloth symbolizing the Ihram is put on the Kabah.

But why is the Kiswah raised every year?

The Kiswah is raised up to three meters each year to prevent damage to the cloth due to large crowds which assemble during the Hajj season and it becomes difficult to regulate the crowd during peak hours. It is also raised due to some superstitious beliefs of certain pilgrims who bring scissors and cut parts of the Kiswah expecting some spiritual benefit and because some people write their names or supplications on the Kiswah.

Why is a white cloth put around the Kabah?

Why the Kiswah wasn’t raised this year on 15th Dhul Qadah?

The Kiswah raising ceremony takes place every year on or a day before or after 15th Dhul Qadah because after 15th a massive influx of Hujjaj takes place which crowds the Mataaf all day around. This would have made the job of raising the Kiswah difficult if undertaken at a later date.

However this year due to restrictions of the number of Hujjaj and a mere 10,000 expected to take part in the rituals, there would be virtually no crowd in the Mataaf making it easy for the job to be done. The Kiswah is now expected to be raised on 1st Dhul Hijjah.