Pilgrims go into 4-day isolation ahead of journey to Mina 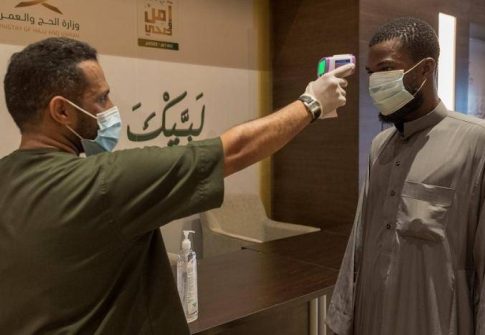 Hajj pilgrims, who have arrived in the holy city of Makkah, were spending time in isolation ahead of the Day of Tarwiyah.

Tarwiyah is the eighth day of the Islamic month of Dhul Hijjah and it marks the journey of Hajj pilgrims from Makkah to Mina, approximately 7 km northeast of the city.

Pilgrims have been arriving in the holy city from Madinah, Riyadh, Abha, Tabuk and Jazan.

Health measures and precautions are in place every step of the way as the pilgrims embark on their holy journey.

Read More:http://Another 4-day isolation for pilgrims ahead of Mina

In remarks to the Saudi Press Agency, he said that pilgrims from 160 nationalities were going to perform this year’s rituals.

He said pilgrims were chosen through an electronic portal, denying that some applicants were preferred over others. Only those who met the required health standards were selected, he emphasised.

Dr. Mashat also underscored the importance of the pilgrims wearing the specialized electronic bracelet that ensures their implementation of home isolation.

Undersecretary of the Ministry of Hajj and Umrah for Hajj Affairs Dr. Hussein Bin Nasser Al-Sharif said the process of receiving pilgrims was smoothly and efficient.

Complete coordination is in place between the Hajj and Umrah, health and media ministries, as well as the General Authority of Civil Aviation, the traffic directorate (Moroor) and Saudi Arabian Airlines, in receiving pilgrims, he added.

Another batch of pilgrims, who are members of the health and security sectors who have recovered from the coronavirus, is expected to arrive in Makkah on Tuesday, he revealed.

The Hujjaj this year come from 160 nationalities residing in the Kingdom with the government of the Custodian of the Two Holy Mosques bearing all expenses.