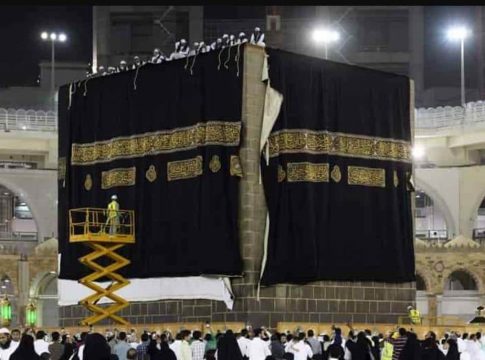 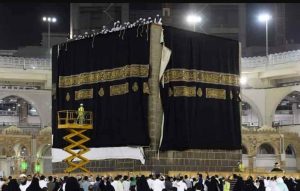 Over 150 technicians and manufacturers Wednesday replaced the Kaaba’s Kiswa (black cloth) with a new one.

Makkah Gov. Prince Khalid Al-Faisal, on behalf of King Salman, handed over the Kaaba Kiswa last week to the senior caretaker of the Kaaba, Saleh bin Zain Al-Abidin Al-Shaibi.
The cloth is manufactured at the King Abdul Aziz Complex for the Kaaba’s Kiswa in Makkah’s Umm Al-Joud neighborhood. It is made of a special natural silk that is dyed in black. The garment is 14 m tall. On its upper third is a belt which consists of 16 square pieces surrounded by a square of Islamic motifs. The belt is 95 cm wide and 47 m long.

The Kiswa consists of four pieces, each covering one of the faces of the honorable Kaaba and the fifth the curtain placed on its door. The making of the curtain is a multi-stage process, as the fabric is combined from the four sides of the Kiswa. The belt and curtain pieces are later added in preparation for its installation over the Kaaba.
More than 110 Kaaba caretakers have been honored through history with the caretaking of the Grand Mosque. The centuries-old tradition has been passed down for generations.
The caretakers have protected their historical God-given legacy and are supported by the Qur’an and Sunnah.
The Kaaba’s caretakers, Bani Shaiba, have had the honor of holding the keys to the Kaaba for 16 centuries.
Before Islam, the descendants of Qusai bin Kilab bin Murrah took care of the Kaaba, whose descendants Bani Shaiba are the current caretakers. They are the ones to whom the Prophet returned the key to the Kaaba after the conquest of Makkah.

Kaaba caretaking is an old profession, which consists of opening, closing, cleaning, washing, cladding and repairing this cloth if it is damaged.
The washing of the Kaaba is done with Zamzam and rose water. Its four walls are wiped and washed with perfumed water and a prayer is performed.
“Our grandfather, Qusai bin Kilab, who was also the Prophet’s grandfather, was responsible for the caretaking of the Kaaba, who passed it on to his oldest son Abd Al-Dar, who in his turn passed it on to his children,” Anas Al-Shaibi, one of the Grand Mosque’s caretakers, told Arab News.
He added that since the beginning of time, the caretaking of the Kaaba is a God-given blessing until the final day. The keys of the Kaaba are preserved at the senior caretaker’s home.
“The commandments of the fathers to their children were the fear of God, in addition to preserving the great principles of Islam; honesty, humility and keeping the key in a dedicated bag made of green silk and gold, while moving it to open the Kaaba,” Al-Shaibi added.

As for the what traits make a good caretaker, Nizar Al-Shaibi said the job requires a head of a family who is responsible for the home’s caretaking. He must be honest and possess good morals.
Al-Shaibi said the Kaaba key’s character has not changed through time.
He said the reason behind a change in the key’s appearance is a failure to open the Kaaba, where it is then repaired or replaced.
The key has a unique appearance and does not resemble a normal key. Al-Shaibi said it must be different and contain a special character unique to the Kaaba. It is also designed in a unique artistic way so no one but the caretakers know how to use it.
Regarding the clothing of the Kaaba, Al-Shaibi said that the Yemeni King Tubba was the first to clothe it. People from all over the world visited him to obtain his consent and gifts. The Quraish tribe never visited King Tubba. When he asked about them, he was told about the Kaaba, so he secretly rode with his army and tore it down.
Al-Shaibi also said that during the king’s preparation of the army, he suffered from severe illness. They tried to treat it to no avail and he was told it was a disease from the heavens. A wise man told him he had bad intentions and to refrain from acting upon them. When he decided to back down from his plans, he miraculously recovered from the disease.
King Tubba sent countless gifts to the people of Makkah and was the first to cover the Kaaba in different colors, until founder of Saudi Arabia King Abdul Aziz established a Kiswa factory, where the cloth is delivered to the senior caretaker each year.

As for the family traditions and whether disputes arise regarding caretaking practices, Al-Shaibi said that the head of the family is the one who takes charge of the duty, adding that his family is cohesive and that any difference is resolved internally.
According to the Prophet, “Only an oppressor will take caretaking away from the Al-Shaibi family.”
God chose this family to be the caretakers of the Grand Mosque 16 centuries ago and the duty is a divine role for which this blessed family has been chosen.
The number of Kaaba caretakers who assumed the honor of caring for the Kaaba is 110.
Before caretaking of the Kaaba was passed down through the Bani Shaiba family for generations to the present day, the tasks of caretakers consisted of opening and closing the door of the Kaaba, supervising its clothing, maintaining what needed to be repaired, built or assembled, using incense, in addition to washing, cleaning and guarding the shrine of Ibrahim.
Now the caretaker’s tasks are restricted to opening and closing the Kaaba. Al-Shaibi is also contacted if the Kaaba must be opened for visits by the Kingdom’s guests.