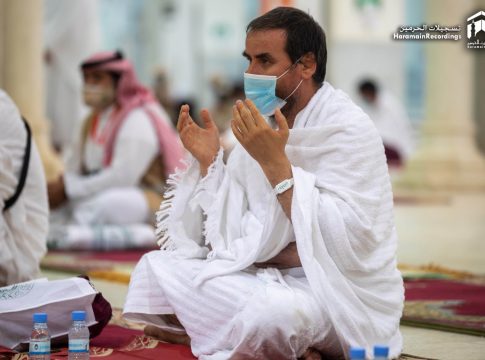 *Saudi Arabia assigns one health leader to every 50 pilgrims

No fewer than 10,000 pilgrims will walk to Jamarat to observe the throwing of stones to the devil today. This was after they left the plains of Arafat yesterday to Muzdalifa under tight security checks.

However, Hajj security forces arrested recently 244 people who attempted to infiltrate into the holy sites to perform Hajj in contravention of the coronavirus precautionary measures and preventive protocols.

Punitive measures have been taken against them after collecting evidence, the Saudi Press Agency reported quoting a spokesman of the Public Security.

The spokesman called on all the Saudi citizens and expatriates to strictly abide by the regulations issued with regard to the performance of Hajj and not to attempt to enter the holy sites without a Hajj permit.

“The security men have clamped a tight security cordon in and around the holy sites to enforce these regulations and catch the violators,” the spokesman said.

Also, it was gathered that the Saudi Arabia’s Ministry of Health has assigned a health leader for every 50 pilgrims during this year’s exceptional Hajj to ensure the implementation of all preventive measures in the aftermath of the global outbreak of coronavirus pandemic.

According to agency reports, the ministry said the health leader will be in charge of making sure that his team members are following the precautionary and preventive measures outlined by the authority, including social distancing and the movement between sacred places, for their safety and comfort.

It is worth noting that the health leader is a qualified health practitioner who will perform visual screening, fill out the follow-up precautionary form inside the pilgrims’ bus, monitor the commitment of pilgrims to preventive and precautionary measures, and report any suspected cases.