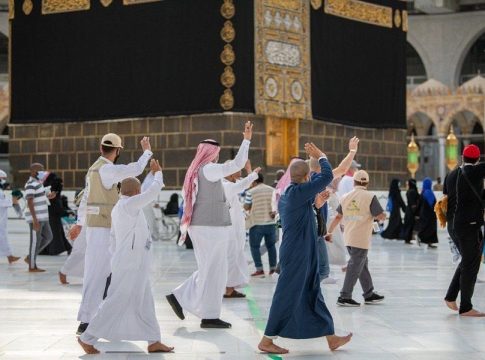 Independent Hajj Reporters, a civil society organisation that monitors and reports Hajj activities both in Nigeria and in the Kingdom of Saudi Arabia has congratulated the Kingdom of Saudi Arabia ably led by the Custodian of the two Holy Mosques, King Salman Bn Abdulaziz and the Crown Prince, Muhammad Bn Salman for successfully organizing Hajj 2020 despite the ongoing Covid-19 pandemic.

IHR extended the commendation in a letter written and dispatched to Saudi Arabian Minister of Hajj and Umrah Dr Mohammed Saleh Bin Taher Benten said  “We write to congratulate the Kingdom of Saudi Arabia especially The Custodian of the Two Holy Mosques, King Salman Bin Abdulaziz and Crown Prince, Muhammad Bin Salman for their exceptional leadership direction that led to the successful conduct of Hajj 2020 despite the current Covid-19 pandemic”.

The letter was signed by the National Coordinator of IHR, Ibrahim Muhammed and was sent through the Embassy of the Kingdom of Saudi Arabia in Nigeria.

“After received the letter, the Charge De Affairs in the Saudi Embassy in Nigeria, Mr Alfawzan thanked Independent Hajj Reporters and promised to deliver the letter to the Minister”.

IHR in the letter further “expresses its deepest appreciation to the Ministry of Hajj and Umrah and other institutions, individuals and groups that worked tirelessly to ensure that Hajj 2020 took place.

It said the feat achieved is a source of Joy and pride to the entire Muslim Ummah.

recall that the Kingdom of Saudi Arabia successfully hosted Hajj 2020 despite the ravaging cases of Coronavirus pandemic; though it was hosted without the participation of pilgrims of other nations from outside the Kingdom, this year’s Hajj was well organised with utmost health and security precautions.

“It is worthy to note that not a single case of Covid-19 was recorded during the Hajj operation”.