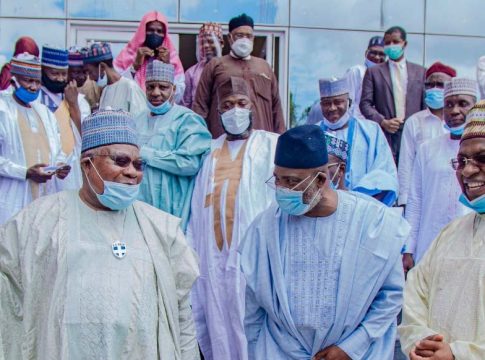 The National Hajj Commission of Nigeria, NAHCON, Thursday signed agreement necessary for the take off of the Hajj Savings Scheme.

The NAHCON Chairman, Alhaji Zikrullah Kunle Hassan, who along with NAHCON’s three permanent Commissioners, played hosts to the guests, described the launching as one of the most important achievements of the fourth board since inauguration in February this year. Describing the Hajj Savings Scheme as a contributory payment scheme for prospective Muslims wishing to undertake pilgrimage to Makkah, the Chairman praised the “…spirit and good intention of the formulators of the Act as well as the doggedness of the first and second Boards of the Commission under the leadership of Mallam Muhammad Musa Bello (the current FCT Minister), as well as the third Board of the Commission under the leadership of Barrister Abdullahi Muhammad Mukhtar respectively… .” Hassan declared that the two boards made significant progress towards the implementation of the Hajj Savings Scheme. 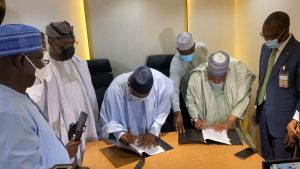 In his remarks as one of the special guests at the occasion, Barrister Olusegun Adeyemi Adekunle, representative of the SGF affirmed “…promoting national cohesion and social inclusion is one of the core principles upon which this administration’s Economic Growth Recovery Plan (ERGP) is built. Government encourages programmes that have positive socio-economic impact on Nigerians and the Hajj Savings Scheme is one of such.” He advised NAHCON and Ja’iz Bank to invest in cyber security as they launch the scheme.

Also speaking at the occasion, the FCT minister, represented by Alhaji Bashir Muhammad, conveyed the minister’s apology and delight in launching of the scheme whose foundation they had painstakingly laid.

Silmilarly, Mallam Umar Mutallab expressed hope that the scheme will uplift NAHCON’s self-sustenance and will ensure utilization of Hajj slots allocated to Nigeria by Saudi Arabia. Mallam Mutallab was optimistic of the success of the scheme, which will hopefully be a template for other countries to emulate.

In his submission, the Ja’iz bank Managing Director, Mallam Hassan Usman disclosed that a unit in the bank has been dedicated to the scheme, with staff and befitting platform designated for success of the program.

There were other goodwill messages followed by a vote of thanks by NAHCON’s Commissioner Policy, Personnel Management and Finance, Alhaji Hassan Yakassai.

Mallam Mutallab on behalf of Ja’iz Bank and Alhaji Zikrullah Kunle Hassan for NAHCON signed the agreement.
With the launching of the scheme, intending pilgrims may register by logging on to https://hajjsavings.jaizbankplc.com:8088.
Likewise, interested applicants can visit state pilgrims’ welfare boards or any Ja’iz bank branch to enrol.

Meanwhile, the NAHCON Chairman revealed that registration for Hajj 2021 has commenced under state pilgrims’ boards.