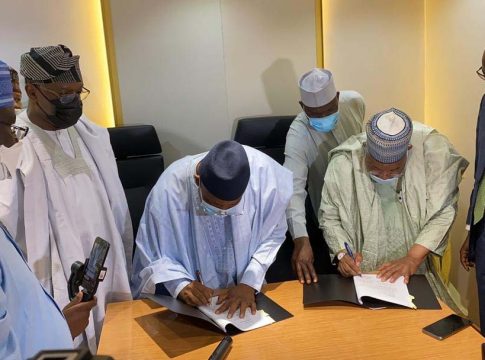 Launching of the Hajj Savings Scheme (HSS) is a historic milestone in the master-plan of National Hajj Commission of Nigeria (NAHCON). It is a scheme that has taken years to build. Although the Commission has not reached the desired destination yet, the launching and signing of agreement were important steps towards a long and hopefully, successful endeavour.

The HSS is Nigeria’s version of Malaysian Tabung Haji. Malaysia began its programme in September 1963. It grew from three bank branches to over a hundred branches; from 1, 281 initial depositors in 1963 to over 4 million depositors today, plus over 1.8 billion dollars in revenue. The target of Nigeria’s Hajj Savings Scheme is to achieve and surpass this. NAHCON believes it is achievable in view of the numerical advantage Nigeria enjoys relative to Malaysia’s.
Read Also:https://kaabanews.com/2020/09/hajj-savings-scheme-our-most-important-achievement-nahcon-chair/
NAHCON’s Vision of the HSS is to create a platform that will ease Hajj enrolment for Nigerian pilgrims in such a way that even the poorest among Muslims will have the opportunity of performing Hajj through self-sponsorship. This will be made possible, God-willing, through a gradual deposit of monies that will be invested on behalf of the depositor until it reaches the desired amount for Hajj fare.

The scheme is currently coming in collaboration with Ja’iz bank during this first phase. At a later time when all necessary governmental procedures are finalized, NAHCON, under HSS trustees, will be sole manager of the scheme.

Monies deposited under the HSS will be invested in shari’a compliant ventures with profits credited to the depositor according to Islamic formula of profit sharing.

The Commission’s prognosis is that, with Hajj Savings Scheme, the future of pre-planned Hajj is here. On the part of Hajj administrators, a pre-planned Hajj will facilitate Hajj arrangement years in advance. It will be goodbye to projection (for unspecified number of people) due to delay in Hajj fare remittance.

A pre-planned Hajj on the part of the depositor means an investor may select the year he or she plans to undertake the Hajj trip regardless of the fact the required amount had been met. The depositor’s profit will continue to accrue notwithstanding.

Pre-planned Hajj means an intending pilgrim does not have to sell himself into poverty due to yearning to worship His Lord on Arafat day, but to save gradually and patiently for his turn.

With pre-planned Hajj, priority for Hajj slots will be given to depositors under the scheme on the basis of first-comers whose funds had reached the required amount. For example, if Nigeria’s allocated slot is 95,000 and 100,000 have qualified, priority will be given to the first 95 that have met the target if they desire to perform the Hajj that year. The remaining depositors will then be rolled-over to subsequent years. Of course, the cash and carry Hajj slot will still be available, but with conditions.

The HSS is expected to contribute to the Nigerian economy in various ways such as utilizing otherwise dormant funds and through tax generation. It is also a means of empowering state pilgrims’ welfare boards with revenue for maximum productivity. Hopefully, zakat that will accrue from the profits will be used as social safety net to serve the Muslim community and by extension, the Nigerian public.
​
To enroll, interested persons may do so through their various States’ Muslim Pilgrims’ Welfare Boards, NAHCON Zonal Offices, closest Ja’iz Bank branches or online from the comfort of their rooms through NAHCON website. Please log on to NAHCON website for the online registration details and other requirements.

The Hajj Savings Scheme is the first of its kind in Nigeria and God-willing it will be the new normal in Hajj registration.