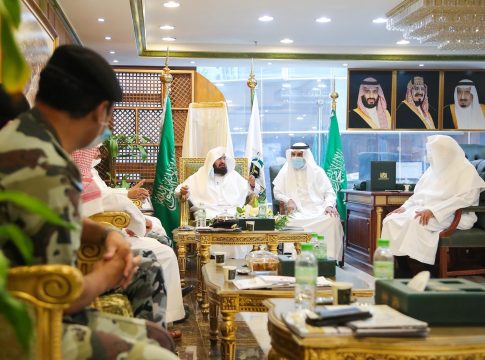 President of the Haramain, Sheikh Abdul Rehman Al Sudais received the Minister of Hajj and Umrah Dr. Mohammad Saleh bin Taher Benten in his office. The meeting according to Haramain Sharifain was to review plans to receive Pilgrims from October 4th, 2020.

From October 4th, the first phase of resuming Umrah will be initiated when local pilgrims can perform Umrah which must have been booked in advance through a special application called اعتمرنا IOS and android which was released today 27 September as kaabanews.com earlier reported.

It was gathered that during the first phase, Umrah pilgrims will be granted a 3 hour time to complete their rituals of Umrah i.e circumbulating the Ka’bah seven times, the performance of 2 rakah Sunnah behind the station of Ibrahim, running between the Mounts of Safa and Marwah seven times (Saee) and the shaving or shortening of hairs.

During the first phase, only 6,000 pilgrims would be allowed to perform their rituals per day.

Citizens and expatriates from within the Kingdom will be allowed to perform Umrah at a capacity of 30 percent.

The fourth phase will allow the performance of Umrah, visit, and prayers by citizens and expatriates from inside and outside the Kingdom, at 100 percent of the normal capacity of the Grand Mosque and the Prophet’s Mosque, when the competent authority decides that the risks of the pandemic have disappeared.