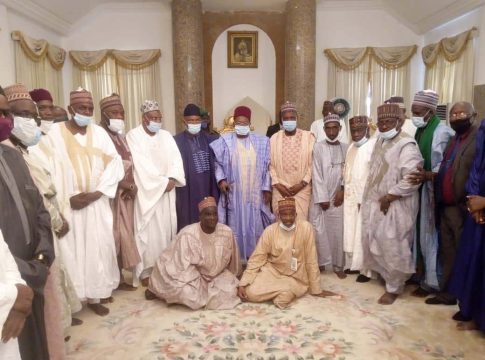 The Chairman, National Hajj Commission of Nigeria, NAHCON, Alhaji Zikrullah Kunle Hassan, has embarked on a familiarization and inspection tour of NAHCON’s ongoing projects across the country.

Among his entourage are the three permanent commissioners of NAHCON, the Commission’s most senior staff, Dr. lbrahim Sodangi, Director Admin and Human Resources and other members of management staff

In each of their stops, the NAHCON delegation pays respect to the seat of government in the state and its royal father seeking for cooperation for NAHCON’s plans as well as to acquaint them of new developments.

In particular, Alhaji Zikrullah enjoined their support for the success of upcoming Hajj Savings Scheme program (HSS) and establishment of the Hajj Training Institute.

The NAHON leader disclosed that among the goals of this board is to see how it can cut down number of days spent by Nigerian pilgrims in Saudi Arabia during Hajj, a pledge to make Hajj fare affordable through some financial engineering, and digitalization of Hajj operations.

Though he acknowledged that achieving all these would not come easy, especially with Hajj fare components being foreign exchange dependent, nevertheless, he promised that NAHCON would ensure affordability of Hajj for all Muslims in Nigeria.

And one of the soonest ways of achieving this is through the Hajj Savings Scheme, he opined. The NAHCON Chairman, lamented that an intending pilgrim must not go into a business or financial suicide in order to raise money for Hajj. Alternatively he can enrol in the scheme to save for the appropriate time and hopefully raise dividends simultaneously. This is the ultimate goal of the HSS.

Also among the NAHCON team’s itinerary is a solidarity visit to the state’s Muslim Pilgrims’ Welfare Boards/Agencies/Commissions to identify with their hard work while advocating for more dedication. At the same time, the team inspects the Hajj Development Levy project for assessment of works.

In their responses, the leaders welcomed the NAHCON team while appreciating their inclusive style of leadership. The Jigawa state governor, His Excellency Muhammadu Badaru Abubakar (mon), for instance, expressed confidence that but for the fact that international Hajj did not take place in 2020, Hajj fare would have been lower. Similarly, the emir of Dutse, His Royal Highness Alhaji Muhammadu Nuhu Sanusi expressed gladness over the HSS while affirming that government should not be spending money to sponsor pilgrimage. We have to engage ourselves in meaningful productive ventures, he agreed. The royal father recalled that Hajj management in Nigeria has become better through the years. He expressed gratitude that this visit will be remembered for being the first of its kind to his institution.

The delegation has thus far visited the governors and emirs of Bauchi state, Kwara state, Kano, Jigawa and Katsina states. Others are Sokoto, Lagos, Bornu among others.

The Executive Chairman/CEO Zikirullah Kunle Hassan and his entourage are currently in Bornu State. The delegation visited the Shehu of Borno’s palace to console the Shehu Alhaji Abubakar Ibn Umaru Garbai Al–Amin, El–Kanemi over the recent death of two eminent personalities, the Shehu of Bama and that of the Emir of Biu. He prayed for repose of the souls of the departed, beseeching Allahr Allah SWT to grant them Al– Jannah.
He also condoled the Shehu on recent ambush on convoy of Governor Borno State Prof. Babagana Umara Zulum at Baga, which led to the death of several security men.

He described the attack as unfortunate, saying that it is happening at the time when the governor is doing his best to reposition the state for good of the people. He prayed Almighty Allah to bring an end such calamity and restore peace to the state.

Zikirullah Kunle Hassan briefed the Shehu on the newly introduced Hajj Savings Scheme among other things and sought his blessings on the on going Hajj activities in the country.