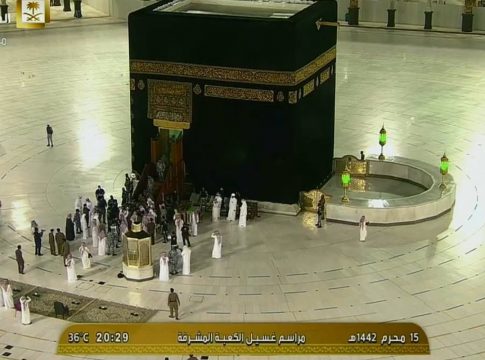 All is set for the commencement of Umurah, the first in 1442 A.H as the host Saudi Arabia strives to flatten the curve on coronavirus.

Recently, the custodian of the two Holy Mosques issued a royal order for registration and commencement  of Umrah, October 4, 2020. Over 250,000 had registered for the lesser hajj via the newly launched “Eaatamarna” application by Ministry of Hajj and Umurah but only few will be approved based on earlier stated measures which include limited numbers and other precautionary measures towards containment of coronavirus.

Several sites have been prepared, namely (Ajyad, Al-Shisha, Al-Gaza, and Al-Zahir) to assemble the pilgrims, then convey them to the Grand Mosque by buses, accompanied by health facilities. They will visit the grand Mosques in batches.

Part of the preparation, it was gathered was the cleaning of Grand Mosques early 10 times daily, sanitizing the toilets 6 times a day, sterilizing the carpets of the Grand Mosque, basins of the Zamzam water fountains, and all vehicles. This measures will continue throughout the period of Umraha.

Some of the new protocols released by the General Presidency for the Affairs of the Hajja and Umrah include:

2. The timings of Umrah each day will be from 7AM will 3AM (the following day)

3. High-resolution thermal cameras have been installed at all entrances to the Grand Mosque, with a ban on i’tikaaf and bringing in food and soft drinks into the mosque.

4. Tawaf will begin in a spiral way and the pilgrims would directly proceed to masa’ (area for the ritual of Saee between Safa and Marwah) after completion of tawaf and will exit the Grand Mosque through the gates of Marwah and Arqam after completion of Sa’ee

5. The the first track of the mataf will be earmarked for wheelchairs of the elderly and people with special needs.