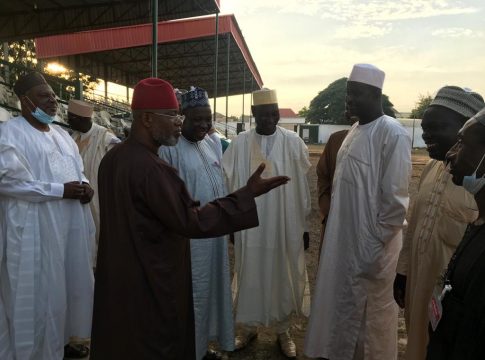 The National Hajj Commission of Nigeria (NAHCON) has launched the Hajj Savings Scheme (HSS) in Kano ahead of the 2021 hajj.

Governor Abdullahi Ganduje of Kano State at the launch, commended the Commission for choosing to launch the newly introduced scheme first in Kano state.

Ganduje advised the Muslim faithful to imbibe the saving culture and long-term planning in order to key into the hajj family.

He said that the scheme was expected to boost economic growth and promote culture of savings among the people.

The Sultan of Sokoto, Muhammadu Sa’ad Abubakar III, also commended NAHCON for the feat, called for the support of Muslim faithful toward the success of the scheme.

Represented by Emir of Bichi, Alhaji Nasiru Bayero, the Sultan urged that all stakeholders in the scheme should give their all so that the scheme can succeed.

He also enjoined Nigerians to continue to pray for peace, stability and progress of the country.

The Managing Director of Jaiz Bank, Alhaji Hassan Usman, said that the bank was committed to the success of the scheme.

Usman said that Bank led HSS was the first of its kind in this area.

He said the scheme would provide reliable and accurate data for effective, efficient service delivery and enhance advance planning.

Chairman of the commission, Zikrullah Hassan, who unveiling the scheme in Kano on Sunday, said the scheme was designed to ease the cost of fare to the holy land.

According to him, the choice of Kano for this event is not an accident but one carefully made because of its status and unique history as the first centre of pilgrims’ departure to Makkah for many decades.

Hassan added that the new system would operate concurrently with ‘Pay As You Go’ at transitional period.

He explained that the commission was collaborating with Jaiz Bank Plc to actualise the scheme.

He said that the NAHCON board’s vision was to upgrade the operation of hajj in Nigeria to global standard.

He further said that the scheme was expected to boost economic growth and entrench the culture of savings among low income groups.

Hassan said that every Muslim faithful, who intended to perform the hajj could enrol on the scheme through the Pilgrims’ Welfare Board in all the 36 states, agencies and commissions or NAHCON offices across the country.

The chairman added that subscribers could also deposit at their convenience and the amount they want to contribute over a specific period to be determined by them.

He said: “The scheme will safeguard the intending pilgrims against fraudster, they will no longer need to sell-off or dispose their live savings or assets, nor would they rely on their relations to be able to pay for hajj anymore.

“It will provide reliable and accurate data for effective and efficient service delivery, enhanced advance planning for accommodation, feeding and airlift operations.

Hassan thanked the Federal Government for its constant support that has enabled the commission to achieve its goals.