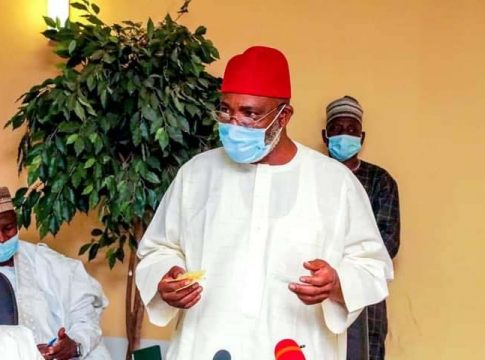 Officials of State Muslim Pilgrims’ Welfare Boards will receive training on the Hajj Savings Scheme. This is in order to further enlighten them on the scheme and as significant stakeholders in the Hajj industry in Nigeria.

Read Also:https://kaabanews.com/2020/09/nahcon-chairman-inspects-hajj-facilities-across-country-see-photos/
Commenting on the projects, the NAHCON Chairman commended the progress of works that are at different levels of completion, at least, 70% completion according to the Ministry Of Works representative in Yola. There is the hotel like accommodation with a 64-room capacity; the camp mosque has been completed 100%, while work is on-going on the multipurpose hall and toilets. Though the Chairman expressed reservation at the speed of the work, he however commended the contractor, giving him a two-month grace period to complete his assignment.

The NAHCON helmsman also used the opportunity to sensitize the state pilgrims’ officials of the Hajj Savings Scheme, the Hajj Training Institute, the digitalization of Hajj operations and the Commission’s plan to reduce number of days spent in Saudi Arabia for Hajj. While at the Yola government house, Alhaji Hassan implored the state government to come to NAHCON’s aid with construction of drainages at the Hajj camp, construction of access road to the site and an amicable settlement to those that encroached NAHCON’s land.

Responding, the state governor represented by his Chief of Staff, Professor Gidado assured the NAHCON delegation of the state governor’s cooperation at all times, pledging that the government will do everything possible to fulfil NAHCON’s demands.

In his address, Executive Secretary of the Commission revealed that of the 2020 registered pilgrims in the state, only 52 sought for a refund, which has been fully completed. He expressed enthusiasm over the NAHCON initiatives reassuring that staff of the state commission will be among the first to register under the training institute. This is because the commission takes staff capacity building seriously as a means of improving productivity, Dr Salihu said.