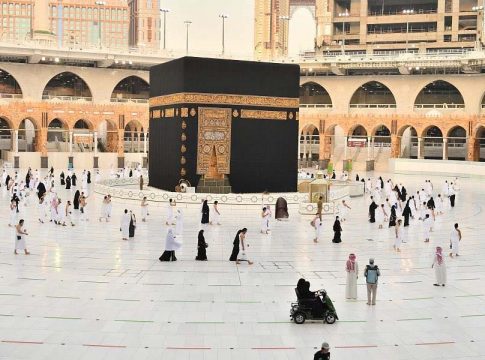 Saudi Arabia Minister of Hajj and Umrah, Dr. Muhammad Benten has said that no less 125,000 pilgrims  have performed Umurah in the last twenty days without any case of coronavirus.

The minister also hailed the pilgrims, workers and officials for complying with all health measures put in place by the authorities.
He made the remark while addressing a virtual seminar titled “Umrah between facilitating procedures and strict precautions,” organized by the ministry recenty.
Benten called on all pilgrims, worshipers, visitors and workers to adhere to all health precautionary measures and preventive protocols, as well as to follow the instructions issued by the authorities.
Read Also:https://kaabanews.com/2020/10/1442-umurah-begins-amid-stringent-protocols-grand-mosques-receive-pilgrims-in-batches-sunday/
“The compliance of pilgrims, worshipers and visitors with health and precautionary measures and the directives of the leaders of the Umrah groups and officials has contributed significantly to the success of the plan for the safe resumption of the services of Umrah and prayers in the Two Holy Mosques, as well as the visit of the Rawdah Sharif, without recording any emergency cases,” he said.

The latest official statistics issued by the Ministry of Hajj and Umrah revealed that a total of 1.2 million pilgrims have registered with the Umrah application Eatmarna during the period between Sept.27 and Oct. 17 to perform the pilgrimage.

The ministry started the second phase of the gradual resumption of the pilgrimage and visits to the Two Holy Mosques from Sunday, Oct. 18. The authorities announced that more than 600,000 worshippers are being permitted to perform prayers at the Grand Mosque along with over 250,000 Umrah pilgrims during the second phase, which will end on October 31.