Saudi Arabia releases guidelines for Int’l pilgrims on Umrah *Only pilgrims between age of 18 to 50 will get permits, *Coys, hotels, airlines ready for business 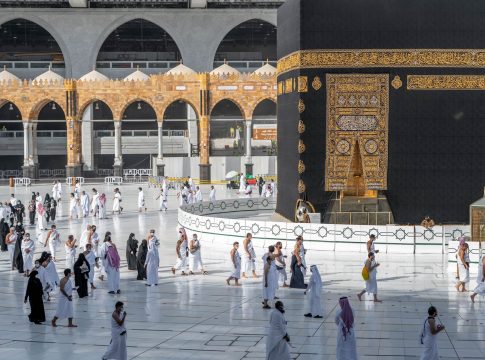 The Saudi Arabia Ministry of Hajj and Umrah has released the protocols to be adhered to by  International pilgrims on lesser hajj beginning from November 1, 2020.

The protocols among others include mainly a negative PCR test that is not earlier than 72hours before departure time in country of origin.

No fewer than 10,000 pilgrims from various countries not hit by coronavirus will arrive the country for the Umrah weekly for the third phase.

The Ministry said that only foreign pilgrims between the age of 18 and 50 will be allowed to perform Umrah during the third phase effective from November. 1

It also stated that the pilgrims must remain three days in quarantine upon their arrival in the Kingdom, according to the precautionary measures and preventive protocols.

The pilgrims must undergo a quarantine period of three days in his hotel in the kingdom.

This will be strictly in compliance with other coronavirus precautions and protocols to ensure the safety of pilgrims coming from abroad, the Saudi Press Agency reported.

This is just as over 500 companies and establishments have indicated their readiness to receive foreign pilgrims during the third phase of the gradual resumption of the Umrah service and visit to the Two Holy Mosques.

We also gathered that the country aviation industry has also announced the reopening of 33 travel destinations, most of which are green countries where COVID-19 is not spreading and preventive measures are being successfully implemented.

They are also required to have confirmed return flights that suit their Umrah programs.

The mandatory components of the service package for each pilgrim include booking accommodation that provides three full-board meals for the quarantine period, which should be at least three days, and transport from the port to the accommodation. They must also have a comprehensive insurance policy.

Pilgrims arriving from abroad will be divided into groups of at least 50 pilgrims. Unified programs must be booked for the groups, including all services that match the date of their booking to perform Umrah and visit the Two Holy Mosques.

The first phase which recorded resounding success was concluded penultimate week where more than 125,000 people had performed Umrah without any case of coronavirus infections recorded among pilgrims.