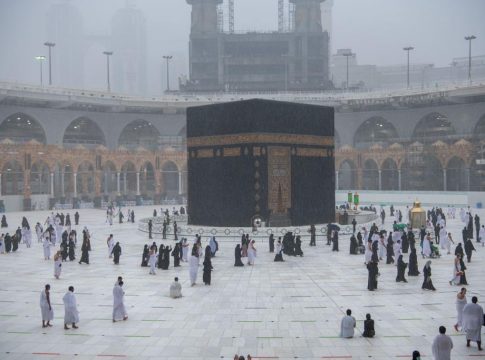 There was heavy rain today in Makkah today as pilgrims dared the weather to perform their Umrah rites. This is the first day the international Umrah pilgrims will be donning the ihram from the Miqaat at Taim to perform the lesser hajj. They have been under three-day quarantine in their various hotels which lapsed Wednesday.

The heavy rainfall created a fog around the holy Kaaba where circumbulation is taking place bring the temperature down by a few notches.

In a video shared by Haramain Sharifain, our partners on Hajj and Umurah reports, it shows that pilgrims defied the rain, and continued their Umrah rites in the rain, just as the cleaners also got busy with their cleaning job in the haram.

The first group of International Umrah pilgrims exit Quarantine and travelled to at Taim (Miqaat) and early today entered the state of Ihram before heading to Masjid Al Haram to perform the Umrah rituals.

Meanwhile, the Ministry have announced that all prayers in Masjid Al Haram, Rawdah Al Shareefah, and visitation to the Rawdah of Prophet Muhammad (May Peace and Blessings of Allah be Upon Him) will only be allowed through a valid permit which needs be obtained through the “Eatmarna App”

The Umrah pilgrims also have to spend not more than 10days in the kingdom for the rites.

This is the first batch of the third phase of the international pilgrims on lesser hajj.

The General Authority of Meteorology and Environment Protection in the past few days have been consistent in their forecast on a thunderstorms accompanied by active winds and rainfall on Jazan, Baha, Makkah, and Madinah. 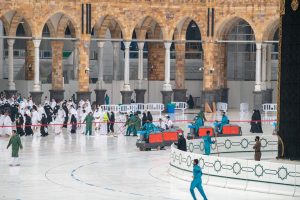