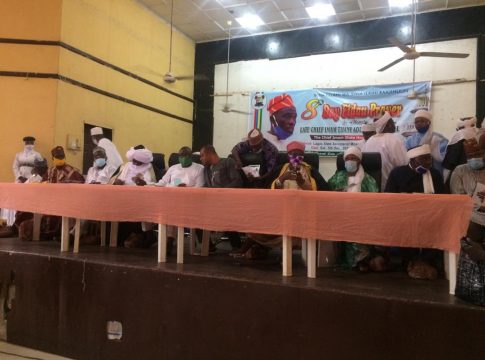 The Governor of Lagos State, Mr. Babajide Olusola Sanwo-Olu has described the late Chief Imam of the State House, Imam Ismail Adejare Tijani as a dedicated Muslim scholar and passionate religious leader with a gift of the Islamic scripture.

The Governor stated this while paying his tribute on behalf of his family and the good people of Lagos State at the eight-day Fidau prayer held at the Multi-Purpose Hall of the Lagos Secretariat Community Central Mosque, Alausa, Ikeja, today.

In the tribute presented on his behalf by his Special Adviser on Islamic Matters, Hon. Ahmed Abdullahi Jebe, Mr. Governor affirmed that in his personal encounter with the late Imam, he saw a man that was dogged in his belief of the oneness of Allah, adding that the late Imam’s sermons during congregation prayers he led in the Lagos House Mosque, Marina, were always about the good above evil.

While emphasising that he personally followed and admired the late Imam during his lifetime, Mr. Sanwo-Olu stressed that his wisdom, knowledge and dedication to the course of Allah stood him apart as a true Islamic scholar.

Also in his tribute, the Deputy Governor, Dr. Kadiri Obafemi Hamzat said that he received the news of Imam Adejare’s death with heavy heart.

He said that the Imam was a man of deep learning, wisdom, very nice, warm, lived a live as dedicated by the Holy Quran and always ready to share with others the blessings he received from Allah.

In his tribute, the National leader of the All Progressives Congress (APC), Asiwaju Bola Ahmed Tinubu said that the death of Imam Tijani left him deeply shocked and devastated.

Asiwaju stated that Imam Adejare was an excellent human being who remained humble, humane, unpretentious and very unassuming till death.

Asiwaju who was represented by his Chief of Staff, Mr. Tunde Rahman, stated that Imam Tijani was not just a close associate but a friend and brother, adding that he did not disappoint but performed his duties as a Public Servant and Chief Imam with diligence, prudence and dedication.

He prayed Allah admit the late Imam into Aljanat Fridaos.

Aside from the barrage of prayers rendered for departed Imam, lectures on the implications of death and lessons for those still alive were delivered in English language by Alhaji Qudus Amuni, an Associate Professor of Arabic Studies, LASU and in Yoruba language by Chief Imam of Nawair-ud-deen Society of Nigeria, Lagos branch, Sheikh AbdulMajeed Ayinla.

The prayer session was led by the Grand Chief Imam of Lagos, Engr. Sulaiman Olohuntoyin Abbu-Nolla, other prominent Imams from the five divisions and Islamic clerics across Lagos State.