Kaaba News
HomeDocumentaryAnalysisLove your brother as you love yourself!

Love your brother as you love yourself! 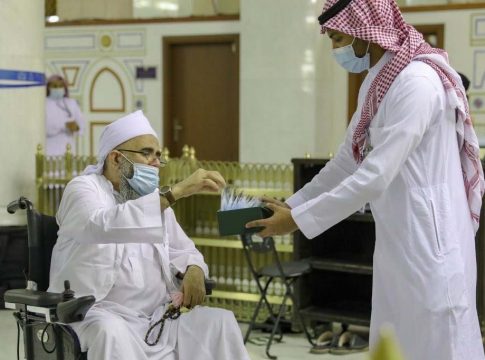 In the Name of Allah, the Most Gracious, the Ever Merciful
All praise is due to Allah, the Lord of all creation. May the salutations of Allah, His peace and blessings be upon our Prophet, his family, his companions and his true followers until the Last Day – then to proceed:
Respected servants of Allah! Abu Hamzah, Anas Bin Malik (RA), who was the servant of the Messenger of Allah (Peace be upon him), reported that the Prophet (Peace be upon him) said:
“None of you truly believes (in Allah and in His religion, Islam) until he loves for his brother what he loves for himself.” [Al-Bukhari and Muslim]
And in the Musnad of Imam Ahmad, the Prophet (Peace be upon him) said:
“The servant does not reach the reality of faith until he loves for others what he loves for himself.”
Also in Sahih Muslim from Abdullah Ibn Amr Bin Al-As, the Prophet (Peace be upon him) said:
“…Whoever wishes to be delivered from the hellfire and enter the garden (Paradise) should die with faith in Allah and the Last Day and should treat the people as he wishes to be treated by them…” [Muslim]
Dear brothers and sisters! These three Prophetic Hadiths carry similar meanings that is to love for other people what one loves for oneself. They (Hadiths) lay down a very significant principle of behaviour of Muslims with each other. A true and sincere Islamic community is when it is built upon love, mercy and compassion for its members. Every member should care for and help one another. They should treat others in ways they want to be treated. It is a community with no barriers among the tribes, races, colour, region, mazhab, group, sect or ranks in implementing this Islamic concept of brotherhood, mercy and love. All these barriers must be removed for this concept to be realised. Other barriers to be removed include jealousy, enmity, hatred, selfishness and envy.
Loving goodness for others is part of loving them. We love good things for them as much as we love those things for ourselves. We treat them the way we want them to treat us.

Read Also: Allah burdens not a person beyond his scope

Part of good treatment of others are excusing them and giving them fair chances. For example, if a person commits a mistake, then we should find excuses for them and not jump to conclusions. There are many possibilities or ways for us to excuse others who have committed mistakes, and hence enabling us to live peacefully and avoid confrontations.
When we deal with other Muslims and also non Muslims in the community, we should deal in the best manner. We should choose the best words in our conversation. The Qur’an says:
“O you who believe! Keep your duty to Allah and fear Him, and speak always the right word.” [Qur’an, 33:70]
And He Almighty says:
“And tell My servants that they should always say those words that are the best. Satan (Shaitan) verily, sows a state of conflict and disagreements among them.” [Quran, 17:53]
Good words can minimise quarreling and confrontations among the members of the society.
Love, Mercy and compassion should exist in our treatment of others. This is related to a very important concept in Islam, which is Al-Wala. The relationship among the Muslim community members is based on this concept of Al-Wala. It does not only mean protection, but it also encompasses love, mercy, care and help. These are the four aspects of Al-Wala normally mentioned by the scholars. These aspects are interdependent with each other. For example, to care for others comes after the loving of others. Therefore, in relation to the Hadith, Muslims must also love and care about other Muslims.
Another important issue is not to be arrogant. This comes in many forms (as mentioned by the scholars) such as belittling others, looking down on others, looking at oneself as being more superior or better than others, etc. The Prophet (Peace be upon him) said:
“He who has in his heart the weight of a mustard seed of pride and arrogance shall not enter Paradise.” A person (amongst his hearers) said: “Verily, a person loves that his dress should be fine, and his shoes should be fine.” He (the Prophet Peace be upon him) remarked: “Verily, Allah is Graceful and He loves Grace. Pride and arrogance is disdaining the truth (out of self-conceit) and contempt for the people.” [Muslim]
Therefore we need to be humble and show mercy to others. Part of loving goodness for others is to practice mutual consultation, enjoining goodness and forbidding evil. The advice is to be done in a good way, based on loving them and not for seeking personal interest. The Prophet (Peace be upon him) also used to show his love of others when giving advice to them. It may also be good to explicitly tell the listeners that the reason we are advising them is because we love them and we care for them. If an advice is specific for a person, then it should be done in private to avoid offending the person.
Imam Fudail Ibn Iyad (Rahimahullah) went one step higher in putting this Hadith into practice. He mentioned that we should not only wish others to be like us but also to wish them to be better than us. However, he said that this is not obligatory (wajib).

Imam Ibn Rajab said that we should wish other Muslims to be better than us in worshipping (Ibadah) and manners (Akhlaq), but at the same time we should wish for ourselves to be better than what we are now. It is not good enough to just wish for something good for other Muslims but at the same time we are deficient and not striving to be better Muslims ourselves. It is from the goodness that we have attained that we also love for other Muslims to have. It is not fair to them that we wish for them to attain the same deficiency that we have in ourselves. Therefore, it is a matter of continuous competition among us to attain the goodness.
Respected brothers and sisters! A related contemporary issue is about the brotherhood in Islam. What criterion should be used in deciding who are the brothers in Islam that they deserve our support? There are many Muslims in the world today, but many of them are weak in faith (Iman) and violating some principles of Islam. In the past, these people were dissociated by the scholars because they were the minority.
However, today it is less appropriate to apply this same principle of disassociation and therefore people with the minimum level of Islam should be considered brothers in Islam. Hence we should care for them and love for them what we love for ourselves. For example, if they commit a sin or any crime then we love for them that they leave the crime and sinful act. We should advise them out of our love and mercy for them.
Dear brothers and sisters! This Hadith can be practiced at any level, any time and with any Muslim. It can be practiced in different manners, in the form of advising, giving charity, enjoining goodness and forbidding evil.
In practicing the Hadith, the various aspects of the Hadith and the inter-related concepts must be observed. A concept cannot be observed in isolation as it may cause misunderstanding and incorrect application of the concept itself.
I ask Allah for peace and good health, and to protect us and all the brothers and sisters, ameen.
May Allah send His Salah and Salam upon our beloved Prophet Muhammad (Peace be upon him).
And all praises and thanks are due to Allah alone, Lord of the worlds. May the peace, blessings and salutations of Allah be upon our noble Messenger, Muhammad, and upon his family, his Companions and his true and sincere followers.
Murtadha Muhammad Gusau is the Chief Imam of Nagazi-Uvete Jumu’ah and the late Alhaji Abdur-Rahman Okene’s Mosques, Okene, Kogi State, Nigeria. He can be reached via: [email protected] or +2348038289761.
This Jumu’ah Khutbah (Friday sermon) was prepared for delivery today, Friday, Jumadah Thani 15, 1442 AH (January 29, 2021).