As Saudi Arabia Ministry of Hajj and Umrah is yet to make announcement about Hajj 2021 or release guidelines to Hajj participating countries; the policy formulations and pronouncements by officials and agencies have indicated that indeed, Hajj 2021 will take place, God willing.

The country’s Minister of Health, Tawfiq  Al-Rabiah, recently stated that COVID-19 vaccination will be a major requirement for performing Hajj this year.

Al-Rabiah ordered the formation of a COVID-19 vaccination committee for hajj pilgrims, stressing that only those vaccinated against the corona virus will be allowed to participate in the 2021 hajj.

Al-Rabiah also called for early preparation to secure the manpower required to manage health facilities in Makkah, Madinah and the ports of entry for pilgrims for the Hajj 2021.

However, Al-Rabiah did not specify the number of pilgrims that Saudi Arabia will receive this year, neither did he mention whether the quota to each country remains as the case in 2020, nor will it be reduced to say, 50, 30 or even 20 percent. The waiting game continues.

The Ministry of Health recently emphasized that “there are no recommendations either for medical isolation after receiving coronavirus vaccine or for a laboratory test before receiving vaccine shots”.

The import of this statement is that there are plans to allow only pilgrims who had been vaccinated to perform his/her Umrah or Hajj without having to observe the 3 days quarantine currently being observed by Umrah Pilgrims.

Another possible plan is to allow a blanket vaccination of all Hajj pilgrims irrespective of whether they are positive or negative after undergoing Covid-19 test on arrival in Saudi Arabia.

Also recently, Minister of Hajj and Umrah Mohammed Saleh Benten said “there are concerted efforts of government and private agencies in Saudi Arabia to cope with the pandemic, and has “mobilized all its energies and capabilities to serve Islam, Muslims and all those who want to come to the Kingdom.”

The Minister further said, “We expect not to see the random crowding that used to happen in previous years in the holy sites. This year, there will be specific standards set for services to pilgrims in Makkah and Madinah, whether they are performing Umrah or Hajj rituals”.

For the sake of emphasis, He said: “this year, (Hajj 2021), there will be specific standards set for services to pilgrims in Makkah and Madinah, whether they are performing Umrah or Hajj rituals”

Deductively, a new set of regulations guiding the contracting and usage of pilgrims’ accommodation, bus services, conducts of Hadaya, movement within and staying in Mashair areas may be lurking.

Remember that hajj participating countries are yet to sign Memorandum of Understanding that could explain those services mention above.

Another ‘green light’ is the establishment of an emergency first aid service center named “Haram Emergency Center 1” inside the Grand Mosque in Makkah to provide emergency health services to all visitors and pilgrims recently. The center is equipped with modern medical equipment to deal with all cases and to ensure the safety and health of pilgrims. 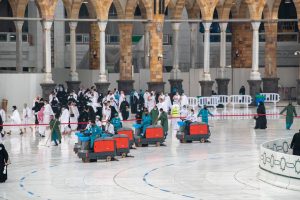 It is noteworthy that prior to Hajj 2020, the Kingdom of Saudi Arabia suspended both Hajj and Umrah local and international pilgrims and even closed the two Holly Mosques for local worshippers.

Hajj 2020 was extraordinary; participants were limited to Saudi Arabia alone and number of pilgrims was limited to around 10,000, compared to around 700,00 locals pilgrims that performed Hajj in 2019.

Fast forward to pre Hajj 2021, the temporary suspension of both local and international Umrah pilgrims has been lifted and the two Holly Mosques are now receiving pilgrims. Hajj 2021 is loading.

Will Nigeria participate in Hajj 2021?

Remember that last week. Pakistan Minister for Religious Affairs, Noor-UL-Haq Qadri said he is aware that “Saudi government is closely monitoring the coronavirus situation and collecting data from all countries.

For that reason, if Covid-19 comes to shove and Saudi Arabia decides to use it as a yard stick for participation in hajj 2021, then the arithmetic will be in favour of Nigeria. Then, enter Iran. Iran with an estimated population of about 84 million people recorded 1.64 million Covid-19 cases with 1.4 million recovery and 60,181 deaths.

Nigeria has the least infection and death rate among top Hajj countries.

More importantly is that over 75 percent of Nigeria intending pilgrims come from rural areas while Covid 19 infection database is derived from urban populations. 60 – 70 percent of that 75 percent has little no or contacts with the inner city. Areas where the largest numbers of registered pilgrims resides have the lowest infection rates in Nigeria. Jigawa, Gombe, Kebbi, Sokoto, Kano, Kwara, Maiduguri, Bauchi, Nasarawa, Yobe, Zamfara and Katsina.

Given the above, Nigeria should be among first class country if Covid 19 infection rate is used as yard stick for participation in Hajj 2021.

The above arithmetic were accompanied more importantly, by the appointment and resumption of the new Saudi Arabia Ambassador to Nigeria, His Excellency Faisa EL Ibarheem AL Ghamdi is also a pointer that the Kingdoms is making preparations to welcome Nigeria pilgrims in Hajj 2021. His predecessor, Late Ambassador Adnan Bostaji died on 4TH February 2020 and since then, the Kingdom of Saudi Arabia did not appoint a replacement till this year.

Above analysis has established one fact and that is: Hajj 2021 will take place and international pilgrims will be allowed to participate. Secondly, that Hajj 2021 will be conducted under strict protocol.

The onus now lies on relevant Hajj stakeholders to plan in a more projective manner, prepare and wait for formal announcement by Saudi Ministry of Hajj and Umrah and also prepare for a worst case scenario.

Finally, my X-ray focuses not on the body languages rather it was based on the ‘voice languages’ of high profile officials of Kingdom of Saudi Arabia in respect of Hajj 2021.