Emir of Ilorin endorses IMAN Board of Trustee, new executives 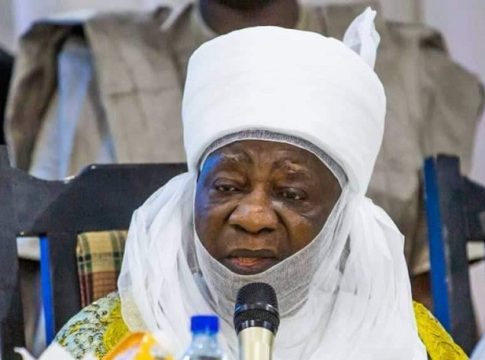 The Emir of Ilorin and Chairman Kwara Council of Chiefs, Alhaji Ibrahim Sulu Gambari, has endorsed the Board of Trustee (BOT) and new executives for Islamic Missionaries Association of Nigeria (lMAN) for sustainability and their contribution towards the progress of Islam.

The traditional ruler expressed his support during a courtesy visit by members of IMAN to his palace in Ilorin.

Sulu Gambari, who also double as the Chairman of Council of Ulamahs in llorin Emirate, acknowledged the association’s intelligence in choosing good hearted, dedicated and respected members as their BoT and officials.

He also agreed on the plans of the association to honour some distinguished members with award, including some Muslim associations, for their contributions towards Islamic propagation.

The first class traditional ruler pledged his continuous support for the association and prayed for success in their activities, planned programmes and the country as a whole.
Sulu Gambari however advised members of the association to sustain the legacies of the founding fathers of IMAN.

Earlier, Imam Abdullahi Nurudeen-Adana, the new Chairman of the association, informed the emir of their plans, his opinions and approval of their BOT and new executives, as well as solicited for support.

Nurudeen-Adana explained that the association had since 1974 been propagating Islam through many of its qualified and notable members, including their founder who was the pioneer Grand Khadi of Kwara, late Justice Abdulkadir Orire.

“IMAN was the first association to start Ramadan lecture in Ilorin Emirate in 1976, by inviting well knowledgeable scholars to educate Muslims and have branches all over the country.

“Apart from the plan to create BOT and select new executives, we also have big project that has been disturbing our mind.

“We want to complete the Auditorium Hall and construct a Mosque, a project that has been abandoned since 1982, located opposite Eid prayer ground in Ilorin,” he said.

The chairman expressed optimism that with the emir’s support, the project would be accomplished before the next Ramadan, adding that his support in the just concluded National Islamic programme made it a successful one.

“We were among those that solicited for financial support during the last Islamic programme that cost N67 million and we realised more than the amount, with the support of the emir.

“We believe that our project will be a successful one with the support and prayer of the emir, especially with the special grace of Almighty Allah,” he said.