National Hajj Commission of Nigeria (NAHCON) delegation has arrived the kingdom of Saudi Arabia for the signing of the Memorandum of Understanding (MOU) a pre- agreement document stating the guidelines to be adopted for the 2023 Hajj. 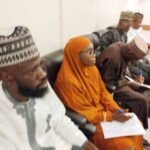 Previous article
Hajj 2023: No restriction, no covid-19 checks — Saudi Arabia
Next article
Hajj Expo 2023: I will live up to expectation —-NAHCON Chair