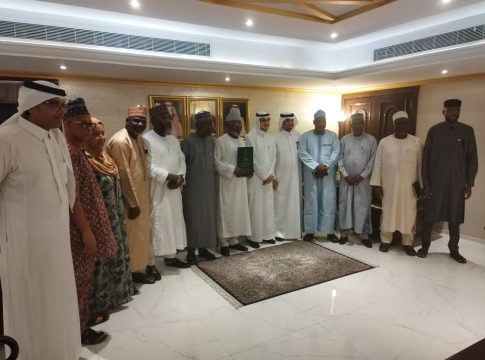 The commission gave the commitment during its visit to the head office of the General Authority on Civil Aviation GACA in Jeddah on Thursday.

The Chairman CEO of NAHCON, Alh Zikrullah Kunle Hassan, while expressing his appreciation to the Authority for its support during last year’s Hajj restated commitment to make the 2023 Hajj a smooth and easy one.

“Let me put on record my profound gratitude to the Authority for its understanding and support during last year’s Hajj and to assure you that with the signing of Memorandum of Understanding MOU very early, we will do everything to make sure that the 2023 Hajj will record a resounding success.”

“We are ready to organise excellent and successful Hajj. We are indeed committed to achieve that. Now that we have ample time and opportunities to plan and diligently screened the airlines, there won’t be room for complaint and excuses,” he added.

In his response, the GACA’s General Manager on Hajj Operations, Engineer Nazim Pazhair commended NAHCON for its unwavering commitment to uplifting the welfare and service delivery to Nigerian Pilgrims.

Engr Nazim therefore emphasized the need for the two organisations to collaborate with a view to making this year’s Hajj successful, adding “we have obligations to pilgrims all over the world and we want all of them to perform Hajj with ease and comfort. It is therefore important for both of us to work with unity of purpose so that the pilgrims can obtain Hajj Mabrur.”

Those on the entourage of the Chairman’s visit included the Nigeria Consul-General to Saudi Arabia, Amb Mansur Abdulkareem, the Commissioners in Charge of Operations Licensing and Inspectorate, Alh Abdullahi Magaji Hardawa,Policy Personnel Management and Finance PPMF, Alh Nura Hassan Yakassai, Commissioner Planning Research Statistics Information and Library Services PRSILS Sheikh Suleman Momoh, representatives of the Forum of Chairmen/Secretaries, President of AHUON,Alh Yahaya Nasidi, the Secretary of the Commission, Dr Abdullah Kotangora,and some staff of the Commission.

In related development, the commission has sealed deal with the Car syndicate with the signing of Agreement by the Chairman/ CEO.

Meanwhile, in continuation of its engagements with relevant agencies and service providers in the Kingdom of Saudi Arabia, NAHCON delegation led by the Chairman/CEO, Alh. Zikrullah Kunle Hassan visited the Adilla Establishments and Ministry of Hajj, (Madina branch), where he canvassed for the support and assistance of the Establishment in approving 80 percent of Nigerian pilgrims arrive and visit Madina before Arafat.

He also solicited the assistance of the Establishment in ensuring the return of the country’s contingent to the Makkah Route Initiative (MRI). The project is an automated luggage Check-in procedure, where the screening and processing of pilgrims’ luggage is done right in the country of departure.

In his remarks, the Deputy Chairman of Adilla Azmin Umar Abashi expressed delight at receiving the NAHCON Delegation and promised to assist the Commission in every way possible to ensure it achieves the desired success in this year’s Hajj. He further intimated the delegation on the need to ensure compliance with flight schedule.

See list of various service providers as released by NAHCON