The Chairman, CEO, National Hajj Commission of Nigeria, NAHCON, Alhaji Zikrullah Kunle Hassan has thanked the Kingdom of Saudi Arabia (KSA) for the cooperation enjoyed by the Nigerian team during the signing of MoU and facilitating early preparations for the 2023 Hajj

“Truly, Nigeria had over the years enjoyed a mutual working relationship and support from the KSA, we in the National Hajj Commission of Nigeria (NAHCON) bear witness to this with the exemplary cordial reception accorded to the Nigerian team by the stakeholders of the Hajj and Umrah industry in the kingdom. Their commitment and understanding accelerated signing of favorable deals on behalf of the Nigerian pilgrims for the 2023 Hajj.
“I here register my appreciation to the Company for the Mutawwifs of Non-Arab African Countries, otherwise known as Mu’assasa for earlier releasing refunds for services not rendered to the Nigerian pilgrims for the 2022 Hajj. We see the Mu’assasa as partners with integrity whose words are their honour. Hence, the Mu’assasa under the leadership of Mr. Ahmad Sindy, is perfecting arrangement for the comfort and welfare of Nigeria’s contingent to the 2023 Hajj. NAHCON had never been in doubt of the establishment’s support.
“The same cooperation was accorded to the delegation during its visit to General Authority for Civil Aviation, GACA, received by its General Manager on Hajj Operations, Engr Nazim Pazhair. The support was witnessed at the Adillah Establishment in Madinah; at the Car Syndicate; at the Islamic Development Bank, as well as at the United Agents authorities.
“I recognize the contributions made by Minister of State, Foreign Affairs, Ambassador Zubair Dada, Senate Chairman for Committee on Foreign Affairs, Senator Adamu Bulkachuwa and his counterpart from the House Committee on Pilgrimage, Hon. Hassan Nalaraba towards the success of the forthcoming season, NAHCON stands by its commitment to ensure the realization of a smooth 2023 Hajj. 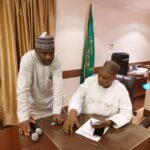 “Similarly, we at the Commission accept the assurances and pledges for cooperation made by the representatives of States Pilgrims’ Welfare Boards/Agencies/Commissions, and those of Private Tour Operators’ Companies towards organizing a smooth Hajj for Nigerian intending Pilgrims’. We have collectively reached certain milestones towards this achievement, the time to galvanize other plans for the success of 2023 Hajj is now. Indeed, we must remain unrelenting until we deliver a hitch free Hajj as planned.
- Advertisement -